The Starlight Astronomy Monitor Course consisted of more than 60 hours of theoretical and practical training from July 12 to 17. 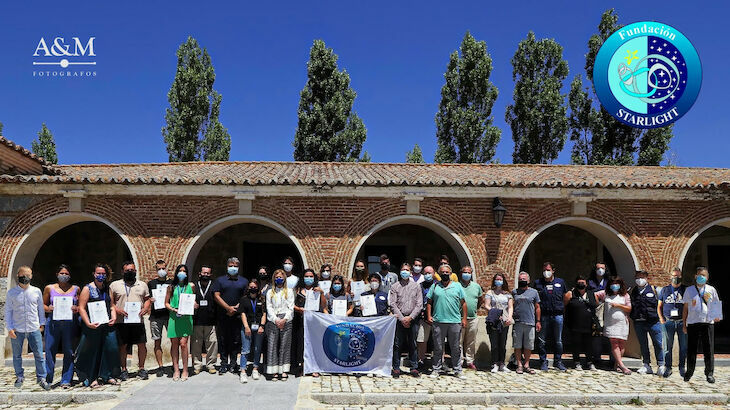 A new Starlight Astronomy Monitor Course in Avila, organized by the Starlight Foundation together with the Provincial Council of Avila, has concluded with the certification of thirty new star tourism professionals.

The course took place from July 12 to 17 at the NaturÃ¡vila facilities. The training, with more than 60 hours of theory and practice, was given by the Starlight Foundation with the collaboration of experts in different subjects such as astronomy, astrophysics, astrotourism and astrophotography.

The profile of the graduates is that of professionals in the tourism sector, nature guides and rural accommodation professionals. In fact, more than 70% of the new Starlight Monitors already belonged to the rural tourism sector and were looking for a specialization in astro-tourism in this training.

This is the second time that the Starlight Astronomical Monitors course is held in the province of Avila, a territory very committed to the development of star tourism, as Mr. Carlos GarcÃ­a, president of the Provincial Council of Avila, remarked at the opening ceremony, which was also attended by the director of the Starlight Foundation, Ms. Antonia Varela, who, in her opening speech, said that the Starlight Monitors course is the first one to be held in the province of Avila. Antonia Varela who, for her part, emphasized the quality of the skies of the province, highlighting those of the Regional Park of Gredos, which have obtained this year the title of first Starlight Reserve of Castilla y LeÃ³n, as well as the Starlight Tourist Destination of the Sierra de Gredos Norte.

The inauguration was also attended by Mr. Pedro Cabrero (first vice-president) and Mr. Armando GarcÃ­a, deputy for European Affairs, Energy and Tourism, who highlighted the relevance of specialization in this emerging sector and the fact that all the Starlight monitors were from Avila, which implies the high interest in the province for astro-tourism.

All attendees also agreed that astronomical tourism is an excellent opportunity for sustainable territorial development and the fight against depopulation.

The main objective of this course, in addition to obtaining official accreditation as a Starlight Astronomy Monitor, was to provide practical information on the professional opportunities offered by astrotourism, the diversity and singularities of the companies dedicated to this activity, how to develop this new product and the best way to promote it.