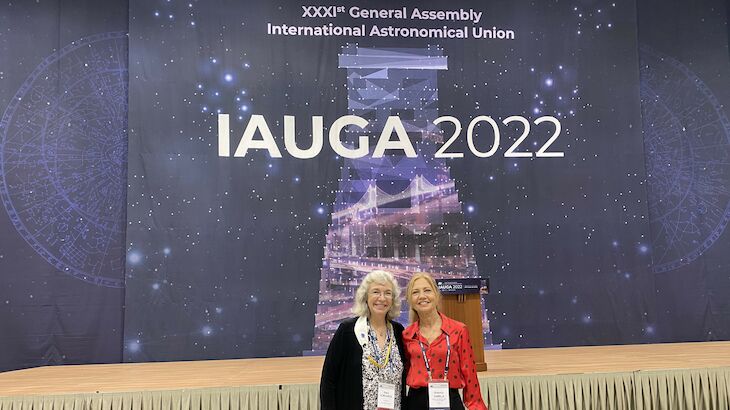 From left to right: Debra Elmegreen, President of the IAU, and Antonia Varela, Director of Starlight Foundation

Together with more than 1,900 participants from eighty countries (including around 700 virtual attendees), the Starlight Foundation participated in the XXXI General Assembly of the International Astronomical Union, IAUGA 2022, that took place from 2 to 11 August in Busan, South Korea.

Antonia Varela, director of the Starlight Foundation and member of the IAU belonging to several commissions, attended the event in person to represent the entity and as a speaker in two speeches. The first, in the Focus Meeting # 2: "Towards a World Standard for Dark and Quiet Sky Protection" and in the Meeting of the Working Group "Professional-Amateur Relations in Astronomy", whose commission she belongs to.

Other relevant events attended by the director of Starlight Foundation during the IAUGA 2022 were the Lunch with Women Astronomers and the presentation of the IAU CPS (Center for the Protection of Dark and Quiet Sky from Satellite Constellations Interference).

The Starlight Foundation, the main promoter of astrotourism at an international level, intends to make known among the astronomical community the work it has been carrying out for years in favor of the preservation of the night sky, the dissemination of astronomy and sustainable development through astrotourism, especially through the development of the Starlight network, which covers both, spaces and the training of professionals.

Another objective of the Starlight Foundation is to continue strengthening ties with the IAU, an organization founded in 1919 whose mission is to promote and safeguard science, in particular astronomy, in all its aspects, including research, communication, education and development, through international cooperation.

In line with these principles, the International Astronomical Union is one of the main signatory institutions of the Starlight Declaration.