The Working Group on Scientific Tourism - Astrotourism has been constituted in the Affiliate Members (AM) Meeting, during the General Assembly of the United Nations World Tourism Organization (UNWTO) held between September 9 and 13 in St. Petersburg, Russ 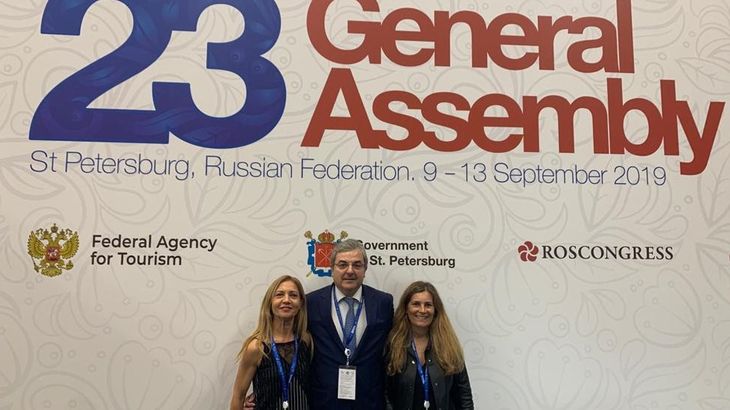 During the 41st Plenary of Affiliate Members that took place on Monday, September 9, at the 23rd UNWTO General Assembly held in St. Petersburg (Russia), the Scientific Tourism - Astrotourism Working Group, led by Starlight Foundation (UNWTO AM since 2015), was established.

This  group has been created with the support of the head of Department of Affiliate Members, Mr. Ion Vilcu, and it is formed, as a starting point, by a group of AMs from leading countries in this sector and, therefore, exporters of experiences and ideas related to astrotourism activities: AssociaÃ§ao Dark Sky Alqueva (Portugal), Sociedad de PromociÃ³n y Desarrollo EconÃ³mico de la Isla de La Palma (SAU) (Spain), George Washington University (USA) and with the participation of the Servicio Nacional de Turismo (SERNATUR), SERNATUR Ministry of Chile (Chile)

The creation of this working group is proposed for under an action initiated by the former director of Starlight Foundation Luis MartÃ­nez and the former director of AMs of World Tourism Organization (UNWTO), Yolanda Perdomo, at the plenary meeting that took place in Armenia in 2016, which laid the foundation for this initiative.

In May 2019, the current director of Starlight Foundation, Antonia M. Varela, resumed negotiations by meeting at the UNWTO headquarters in Madrid with the also new director of Affiliate Members Department, Ion VIlcu, to present and invigorate this project.

It is planned to create a road map with the support of other AMs. From here, different contacts are established with leading AMs in astrotourism and tourism industry research. The director of Starlight Foundation defends the proposal in the Plenary of AMs in St. Petersburg, where it is approved and the group is constituted.

The main purpose of the group will be to see the potential of this branch of tourism, as well as to create a forum where ideas and experiences about combine Science and Tourism are studied and contrasted, starting with the astrotourism.

As a novelty, the UNWTO has created an app platform where the connection between AMs, the organization of events and the agile transfer of information will be facilitated.

One of the actions of this new Scientific Tourism working group will be the celebration of the 1st International Astrotourism Conference by Starlight that will take place between May 20 and 23, 2020 in Ãvora (Portugal), organized by Starlight Foundation and AssociaÃ§ao Dark Sky Alqueva .