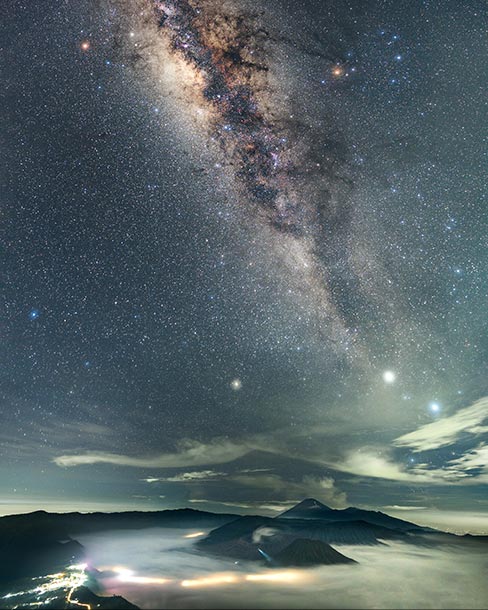 -The first step is to fulfil the registration form (Application Pack), in which a series of informative data must be gathered about the place, the responsible entity... And some data must be provided which indicate the good quality of the sky of the place, waiting to obtain later the measures of the parameters required by the Foundation, according to its criteria.

(These preliminary references about the quality of the sky can be very different: photographs of the night sky taken by astronomers and amateurs, measures available of some observatory nearby, meteorological data, absence of pollutant populations, etc.)

-To forward this form to the Foundation, together with the signature of a document which gathers the commitment of adhesion to the values contained in the âStatement about the Defense of the Night Sky and the Right to the Light of the Starsâ, Magna Carta of the Foundation, emerging from de I International Starlight Conference and in whose elaboration, in addition to the Institute of Astrophysics of the Canary Islands (IAC) were involved actively representatives of the UNESCO, OMT, IAU, PNUMA-CMS, CE, SCDB, COE, Program MaB and Ramsar Convention, in addition to other institutions. These documents are forwarded to them from the Foundation.

-Together with the Application Pack fulfilled, 800 euros must be paid [1], in concept of preregistration, since the information provided must be studied by our specialists who, in addition, will gather as many additional information as useful to know the suitability of the candidate territory.

-Once the form has been studies, the candidature will be approved or rejected.

-Once the candidature has been accepted, and with the data available and others which can be requested, the Foundation prepares a detailed budget with the cost of:

a) the acquisition or gathering of data about the quality of the sky, depending on the extension of the area to be studies and of its characteristics;

the certification which is accompanied by a Report of Recommendations for the protection of that sky and possible lines of development of the astrotourism.

-Once the budget has been accepted, the Starlight Foundation will proceed to the issuance of the bill corresponding to the acquisition of measures and subsequent certification â whose cost will remain shown in the initial budget-.

- In these cases, after receiving the corresponding payment, the specialists will be sent who will be in charge of carrying out the analysis of sky quality and who will analyze as well in the territory the infrastructures and possibilities for the development of the astrotourism activity.

- Once the mentioned phases have been accomplished, it proceeds to the issuance of the Certificate as Starlight Village or City (unless, in very exceptional cases, it was denied), which will be accompanied by a Recommendations Report to be taken into account by the managers, to protect the dark sky, to train expert guides and to develop the astrotourism.

- Together with the certificate it is also sent the accreditive diploma and official logo of the Village or City.

* Two years after the certification, the territory must elaborate a report about the actions carried out in the area and the fulfilment of the recommendations provided. The study of such report entails the payment of 680 euros.

*Four years after the report, the certification will be reviewed, through a new report, confirming that the conditions which caused its granting are still met and reporting about the progress performed in view of the recommendations received back then. The cost of this review by the experts is 1.650 euros, unless, very exceptionally, it was needed an audit due to having varied substantially the original conditions of the place.